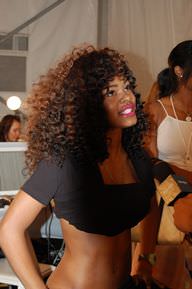 She is a notable American singer-songwriter, dancer, actress, and model, who landed herself a contract with Star Trak Entertainment in 2005. Teyana Taylor soon made her acting career debut on MTV's 2005 - 2017 teenage documentary series, "My Super Sweet 16".

After her departure from the aforementioned label, she landed another deal with Kanye West's record label, "Good Music" in 2012.

With her remarkable writing skills, Taylor has written several records for high-ranking artists such as Omarion, Usher, and Chris Brown.

She was born to parents of Afro-Trinidadian origin. Her mother is Nikki Taylor. She got married to American basketball player, Iman Shumpert, in 2016. She is noted to have a daughter named Iman Shumpert Jr.

She was awarded the "Best Choreography" at the 2017 MTV Video Music Awards.

Taylor got nominated for the "Best Female R&B/Pop Artist at the 2019 BET Awards.

She got nominated for the "Best Dance Performance" at the 2019 Soul Train Awards.

She started performing when she was 9.

Her husband, Iman delivered their first child with his bare hands at home.

Teyana Taylor's birthday is in 308 days

Where is Teyana Taylor from?