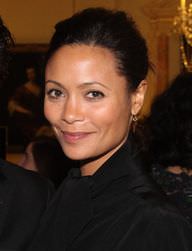 Thandie Newton is an English actress. She is best known as a character actress.

She has won a Bafta, a Hollywood Film Award and a Screen Actors Guild Award.

She was born in London in 1972. She is of Zimbabwean descent. She is married and she has 3 children. Her daughters, Ripley and Nico, are named after character Ellen Ripley in the "Alien" film series and German singer Nico.

Thandie Newton's birthday is in 30 days

Where is Thandie Newton from?