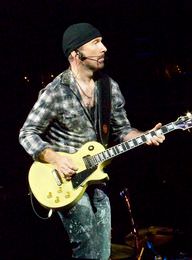 The Edge is a celebrated British-born Irish songwriter and guitarist famed globally for being a member of the iconic Irish rock band U2. He is widely regarded as one of the greatest guitarists of all time.

He is the son of Gwenda and Garvin Evans. He grew up with two siblings, including musician Richard "Dik" Evans. In 1983, he got married to his longtime girlfriend Aislinn O'Sullivan, with whom he has three daughters. After he and Aislinn officially divided in 1996, he began a romantic relationship with professional dancer Morleigh Steinberg, with whom he had two children. He and Morleigh tied the knot in 2002.

He almost left U2 in 1981 because of religious reasons.

He and the other members of U2 were inducted into the Rock and Roll Hall of Fame in 2005.

In 2015, he sustained injuries after falling off stage during a live performance.

Viewers of The Edge, also viewed

F.A.Q. about The Edge

The Edge's birthday is in 186 days

Where is The Edge from?

He was born in Barking, Essex, England, UK.