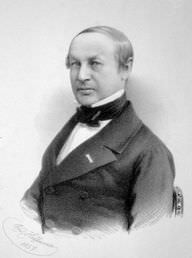 Theodor Schwann was a renowned German physiologist who has been credited for discovering pepsin in animals. His major contribution to the study of biology was the development of cell theory. He was also celebrated for coming up with the Schwann cell which can be found in the nervous system.

The celebrated scientist also introduced the "metabolism" term which was first used in his publication titled “Microscopical researches”.

His parents were Elisabeth Rottels and Leonard Schwann.

He worked with Johannes Peter Müller, a famous physiologist at the University of Berlin’s Anatomisch-zootomische Museum.

He also discovered the organic form of yeast.

Theodor Schwann's birthday is on December 7, 1810.

Theodor's birthday is in 65 days

How old was Theodor when he died?

Theodor Schwann would be 211 years old if he was alive today.

Where was Theodor from?

He was born in Neuss.