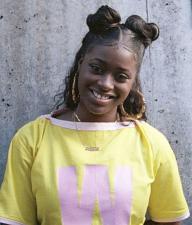 Tierra Whack, formerly known as Dizzle Dizz is a top American rapper, songwriter, and singer who is best known for her debut album, Whack World.

Her mother, a nurse, raised her, together with two younger siblings. She revealed in 2018 that she and her father are not on good terms.

During the 2019 Grammy Awards, the music video for her single, “Mumbo Jumbo”, was nominated for “Best Music Video”.

She initially rose to fame in 2011, through her freestyle raps under the name, Dizzle Dizz, before going back to her birth name in 2017.

She initially worked at a car wash before her rise to stardom.

Tierra was homeless for about three months after returning to Philadelphia to begin her rap career.

She is allergic to insects in real life, as she satirizes in the video for “Bugs Life”.

Tierra Whack's birthday is in 14 days

Where is Tierra Whack from?

She was born in Philadelphia, Pennsylvania, United States.

Tierra Whack is a famous American rapper, who was born on August 11, 1995. As a person born on this date, Tierra Whack is listed in our database as the 62nd most popular celebrity for the day (August 11) and the 471st most popular for the year (1995).

People born on August 11 fall under the Zodiac sign of Leo, the Lion. Tierra Whack is the 2129th most popular Leo.

Aside from information specific to Tierra Whack's birthday, Tierra Whack is the 11955th most famous American.

In general, Tierra Whack ranks as the 20593rd most popular famous person, and the 712th most popular rapper of all time. “The Famous Birthdays” catalogs over 40,000 famous people, everyone, from actors to actresses to singers to tiktok stars, from serial killers to chefs to scientists to youtubers and more. If you're curious to see who was born on your birthday, you can use our database to find out who, what, where, when and why. You can search by birthday, birthplace, claim to fame or any other information by typing in the search box, or simply browse our site by selecting the month, the day, the horoscope, or any other clickable option.