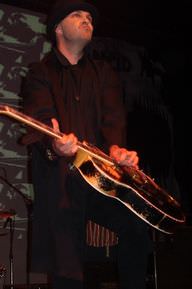 This work has been released into the public domain by its author, Katexnixon. This applies worldwide.
In some countries this may not be legally possible; if so:
Katexnixon grants anyone the right to use this work for any purpose, without any conditions, unless such conditions are required by law.
Source
http://commons.wikimedia.org/wiki/File:TimLiveSept2008.jpg
License
Public domain

Tim Armstrong is an American singer, songwriter, musician, record producer, filmmaker, actor and music video director. He is widely recognized for being a singer and guitarist for Rancid, a punk rock band he co-founded in 1991.

He is also known for his membership of Transplants, a hip hop/punk rock supergroup formed in 1999. He co-founded the record label, Hellcat Records in 1997.

He was raised in Albany, California. Australian musician Brody Dalle was his wife from 1997 to 2003.

He shared a Grammy Award for “Best Reggae Album” for his work on Jimmy Cliff’s 2012 album, “Rebirth”.

As a songwriter, he has also written songs for Gwen Stefani, Pink and Joe Walsh.

Where is Tim from?

He was born in Berkeley, California, U.S..