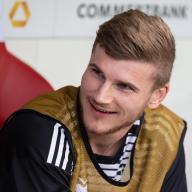 Timo Werner is a skilled German football player who joined the English football club, Chelsea in 2020. He began his senior career, in football, with VfB Stuttgart in 2013. Before he joined Chelsea he played for the German club named RB Leipzig. He also played for the national youth teams of Germany before he was called to join the senior national team in 2017.

He is the son of Sabine Werner and Günther Schuh.

He mostly plays in the forward position. He is 5 feet 11 inches tall.

Werner began his youth career in football with TSV Steinhaldenfeld. He earned the alias ‘Turbo Timo’ as a result of his incredible fast pace on the field.

Timo's birthday is in 152 days

Where is Timo from?

He was born in Stuttgart, Germany.

What is Timo Werner's height?