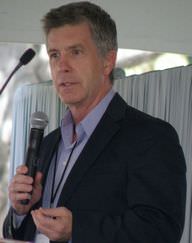 Tom Bergeron is an American television host and comedian famed for hosting the popular reality television showAmerica's Funniest Home Videos from 2011 to 2015. He is also known for hosting ABC's dancing competition show Dancing with the Stars.

He was born to Kay Bergeron and Ray Bergeron. In 1982, he married Lois Harmon. Two children were born to the marriage.

He is a recipient of multiple Emmy Awards. He is also an inductee into the Massachusetts Broadcasters Hall of Fame.

For several years he struggled with stress and anger management issues. According to him, yoga and meditation helps him to control these issues.

Where is Tom from?

He was born in Haverhill, Massachusetts, U.S..