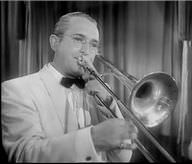 Originally named Thomas Francis Dorsey Jr., but professionally called Tommy Dorsey was one of the best American jazz musicians. He is widely remembered for leading several prominent big bands during the “Swing” era.

He was from Mahanoy Plane, Pennsylvania. His father was a music director who provided him with early musical training.

In the late 1920s, he played on several bands with his brother Jimmy Dorsey, and they were known as the “Dorsey Brothers.”

Between 1929 and 1934, his group “Dorsey Brothers” released multiple records and were among the first jazz bands to broadcast their music on radio. Their notable hit songs include “Coquette” and “I Believe in Miracles.”

After the “Dorsey Brothers” broke up in 1935, he took over the “Joe Haymes Orchestra.” He then recorded and released “I’m Getting Sentimental over You,” which eventually became his headline and theme song. In addition, the song also gave him the alias, “The Sentimental Gentleman of Swing.”

Tommy's birthday is in 51 days

How old was Tommy when he died?

Tommy Dorsey would be 116 years old if he was alive today.

Where was Tommy from?

He was born in Shenandoah, Pennsylvania, U.S..