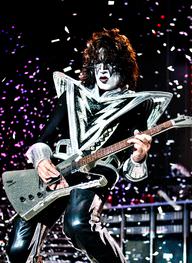 Tommy Thayer’s rise to prominence began after his high school education when he started playing in club bands and garages. The renowned American guitarist went on to co-create the group known as the Movie Star, which would later be known as Black 'n Blue. In 1984, three years after it was formed, the group released their self-named first album.

He became a global icon when he joined the highly-rated band called Kiss in 1994. He’s mostly known for his ‘Spaceman’ role in the group. His performance has helped the collective to complete a number of projects including their 1989 album “Hot in the Shade” which spawned hit tunes like "Forever".

He’s the son of former Army officer James Thayer and his wife Patricia Thayer who was also a musician. He grew up alongside four other siblings. He has disclosed that he has a daughter called Sierra Sanchagrin whose mother is simply known as Christina.

He studied at Sunset High School.

As a member of Kiss, he has been inducted into the Rock and Roll Hall of Fame. He has also won many laurels with the group including the Classic Rock Roll of Honour Awards.

Tommy's birthday is in 33 days

Where is Tommy from?

He was born in Portland, Oregon, U.S..