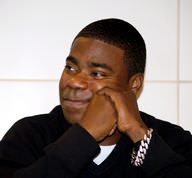 He is prominent for being a comedian, actor and voice actor. Tracy debuted in 1988 and has participated in several works and he is also notable for his comic role in the TV series, "Saturday Night Live".

He was born to mother, Alicia Warden – a homemaker – and father, Jimmy Morgan who was a returnee from the Vietnam War.

Tracy got wedded to Sabina Morgan in 1987 and they were both married for about 22 years before they divorced in 2009. On 23rd of August 2015, he got married to Megan Wollover.

His role in "30 Rock" earned him a nomination for the "Outstanding Supporting Actor in a Comedy Series" category at the 2009 Emmy Awards.

At the 2007 and 2008 Image Awards, he got nominated for the "Outstanding Supporting Actor in a Comedy Series"

His father abandoned him when he was just six.

He had a rough childhood as he sold crack cocaine to make a living prior to his venture into comedy for rescue.

He was named "Tracy" in honor of his dad's friend who died in the Vietnam War.

His father died of AIDS.

I deal with my sons like young men. If they have a problem with something, they come to me. I am the type of dad that will drop everything I am doing for them, and always tell them to talk to me about it.Tracy Morgan

I have snakes, three sharks, moray eels, piranhas, five scorpions and a bird spider. All of them are predators. They are dangerous but it's cool to have strong and powerful pets.Tracy Morgan

My sense of humor is a turkey, and I pull it out of the oven and baste it in reality.Tracy Morgan

Stand-up don't get no respect - it's the hardest thing to do in show business. You don't have no band and there's no music.Tracy Morgan

You get somebody to crack a smile, that's a beautiful thing.Tracy Morgan

People born on November 10 fall under the Zodiac sign of Scorpio, the Scorpion. Tracy Morgan is the 549th most popular Scorpio.

Aside from information specific to Tracy Morgan's birthday, Tracy Morgan is the 5182nd most famous American and ranks 95th in famous people born in Brooklyn, New York, U.S.

In general, Tracy Morgan ranks as the 8579th most popular famous person, and the 109th most popular comedian of all time. “The Famous Birthdays” catalogs over 25,000 famous people, everyone, from actors to actresses to singers to tiktok stars, from serial killers to chefs to scientists to youtubers and more. If you're curious to see who was born on your birthday, you can use our database to find out who, what, where, when and why. You can search by birthday, birthplace, claim to fame or any other information by typing in the search box, or simply browse our site by selecting the month, the day, the horoscope, or any other clickable option.