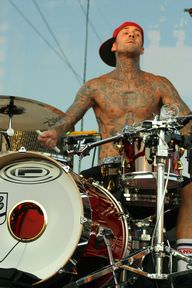 Travis Barker is an American drummer and music producer known for being the drummer of the rock band Blink-182, who are famous for releasing hits such as Dammit (Growing Up), What's My Age Again? and All the Small Things. He is also known for his frequent collaboration with other artists, most notably with the late DJ AM. He released his solo debut album, Give the Drummer Some in 2011. Rolling Stone once called him "punk's first superstar drummer".

His first marriage was to Melissa Kennedy. The marriage lasted only nine months. He later married Miss USA 1995 Shanna Moakler in 2004. The marriage, which ended in the year 2006 produced two children - reality stars, Alabama Barker and Landon Barker.

He founded the clothing company Famous Stars and Straps and the record label LaSalle Records in 1999 and 2004 respectively.

Travis' birthday is in 283 days

He was born in Fontana, California, U.S..