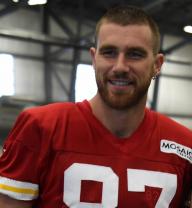 Travis Kelce became an established player in the National Football League after joining the Kansas City Chiefs in 2013. The American, who is known for featuring in a tight end position, began his professional career with the Cincinnati Bearcats football team during his days in college.

He’s the junior brother of football star, Jason Kelce. He started dating a lady called Maya Benberry in 2016, after she emerged as the winner of the television dating show dubbed “Catching Kelce”. The couple, however, broke up a year later.

In 2017, Kelce announced that he has begun dating Kayla Nicole, an internet personality. But after three years, the couple went their separate ways.

During his days in high school, he played basketball and baseball.

Travis' birthday is in 3 days

He was born in Cleveland Heights, Ohio, U.S..