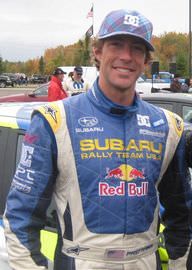 Travis Pastrana is a celebrated American stunt performer and motorsports competitor famed for his breathtaking stunts as well as for winning numerous gold medals and championships at the X Games and the Rally America National Championship respectively. He is also known for creating and starring in the famous live action sports show Nitro Circus.

He is the son of Debby and Robert Pastrana. In 2011, he got married to professional skateboarder Lyn-Z Adams Hawkins. The couple welcomed their first child in 2013. In 2015, the pair had their second child.

At the age of 19, he almost lost his life after getting involved in a violent accident with his Corvette. The accident left him with severe injuries.

He started riding motorbikes when he was only 4.

In 2007, he performed one of his most dangerous stunts, which saw him jump out of an airplane without a parachute.

Travis' birthday is in 311 days

He was born in Annapolis, Maryland, U.S..