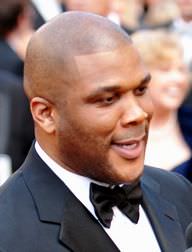 Title
Tyler Perry mixes it up with the media on the red carpet at the 82nd Academy Awards.
Author
Source
http://commons.wikimedia.org/wiki/File:82nd_Academy_Awards,_Tyler_Perry_-_army_mil-66455-2010-03-09-180359_(cropped).jpg
License
Public domain

Tyler Perry is an American filmmaker and producer. Since 2012, he has an exclusive multi-year partnership with the Oprah Winfrey Network.

He was the highest paid man in entertainment in 2011, according to Forbes magazine.

His films have been nominated for 11 Golden Raspberry Awards.

Model Gelila Bekele is his partner. They have a son together. Oprah Winfrey, Janet Jackson and Will Smith are among his best friends. Actor Idris Elba and director Spike Lee have critisized his work.

Tyler's birthday is in 229 days

Where is Tyler from?