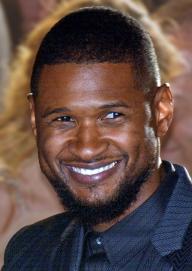 Usher, as he’s widely known in the entertainment world, started performing at age 12 when his mum registered him for a singing competition. His performance caught the attention of lots of people at the event including a representative from the LaFace Records label. He was immediately signed onto the label. Since then, the American singer, dancer, actor, and songwriter has released series of hit tracks like "Call Me a Mack", "Love in This Club Part II", and "She Came to Give It to You".

His first self-titled studio album came in 1994 which received lots of praise from the public. He has also released other successful albums – some of them include “My Way”, “Confessions” and “Hard II Love”.

His performance in movies such as “In the Mix” and “Hustlers” further increased his popularity level.

Outside showbiz, he’s known as Usher Raymond IV and was born to Usher Raymond III and Jonetta Patton. He was romantically connected to singer, Chilli Thomas in 2001 but broke up two years later. In 2007, he married fashion stylist, Tameka Foster and gave birth to their first son named Usher "Cinco" Raymond V that same year. Their second child, Naviyd Ely Raymond, came the following year.

After he divorced Foster in 2009, Usher got wedded to his longtime sweetheart, Grace Miguel in 2015 – they divorced three years later.

His performances and songs have earned him lots of individual awards and honors which includes ‘Grammy Awards’, ‘Music of Black Origin Awards’, ‘American Music Awards’, and ‘BET Awards’.

He began his career as a member of the group known as NuBeginnings.

Usher's birthday is in 254 days

Where is Usher from?