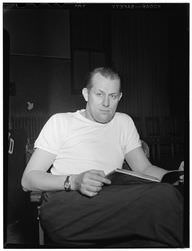 Hailing from the US, Vaughn Monroe was a baritone singer, trumpeter, actor as well as businessman. He rose to prominence in the 1940s and 1950s. In 1940, he founded his first orchestra and played the role of a principal vocalist.

He was educated at Jeannette High School, New England Conservatory, and Carnegie Institute of Technology.

He was the offspring of Ira C. Monroe and Mabel Monroe. In 1940, he tied the knot with Marian Baughman. He birthed two children, Candace Monroe and Christina Monroe.

He died from bleeding ulcer after a stomach operation in 1973.

In 1940, Monroe founded a restaurant and club which he named The Meadows.

His nicknames included the Baritone with Muscles, Ol' Leather Tonsils, Leather Lungs, and the Voice with Hair on its Chest.

Monroe has a star for radio performance and another for recording on the Hollywood Walk of Fame.

He once hosted a show called ‘The Vaughn Monroe Show’. 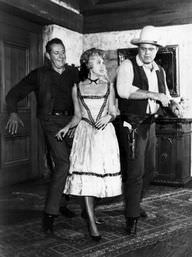 Vaughn's birthday is in 245 days

How old was Vaughn when he died?

Vaughn Monroe would be 111 years old if he was alive today.

Where was Vaughn from?