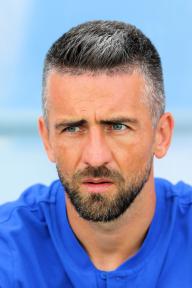 Vedad Ibišević is a renowned Bosnian soccer star whose career began in the United States. After some impressive performance in the U.S., the center forward joined French side Paris Saint-Germain. With limited playing time, Ibišević spent the 2005/06 season on loan at Dijon before making the switch to Alemannia Aachen in Germany in 2006.

He went on to play for teams like 1899 Hoffenheim, Hertha BSC and VfB Stuttgart before announcing his retirement in 2020.

He played for the Bosnia and Herzegovina Under 21 side before making his senior debut in 2007. His goal against Lithuania in 2013 helped the team to qualify for the FIFA World Cup the following year. He was capped 83 times for his country in which he scored 28 goals.

His two children with Zerina Medić are Ismail and Zejna.

He graduated from Roosevelt High School before enrolling at Saint Louis University.

Ibišević was named Bosnian Footballer of the Year in 2008. The following year, he was selected into the ESM Team of the Year.

He scored his country’s first-ever goal at the FIFA World Cup.

His first hat-trick for his country came in 2012.

Vedad's birthday is in 246 days

Where is Vedad from?

He was born in Vlasenica, SFR Yugoslavia.

What is Vedad Ibišević's height?