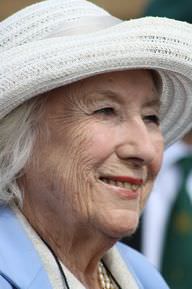 She was a seasoned British singer, songwriter and actress, who was massively prominent during World War II. During the peak of her success, Vera Lynn’s music cut across Europe, Asia, Africa and beyond. As a result, she performed numerous outdoor musical concerts for the troops during the war.

Despite the huge personal risks, during the war, she was courageous enough to present some of her concerts to troops located in Burma, India, Egypt as a part of the Entertainment National Service Association (ENSA).

She was affectionately referred to as "the Forces' Sweetheart". Even after the war, she stayed relevant and was a prominent figure on radio and television.

The singing legend died in June 2020. Several top dignitaries took to social media to pay tribute to her - some of them include Boris Johnson, Carrie Symonds, Sir Cliff Richard, and Katherine Jenkins.

Her father, Bertram Welch was a plumber, while her mother, Annie Martin was a dressmaker. She grew up with her senior brother named Roger Welch.

She got married to English saxophonist and clarinetist, Harry Lewis in 1941 and they both stayed married for about 57 years until his death in 1998. She left behind a daughter named Virginia Lewis.

Vera gained the "Outstanding Contribution to Music" award at the 2018 Classic Brit Awards.

She was honored with the accolade, "Freedom of the City of London" in 1978.

She was also rewarded with the "Commander of the Order of Orange-Nassau, The Netherlands" in 1977.

She gave birth to just one child so she could work more.

English politician and Prime Minister of the United Kingdom

Vera's birthday is in 260 days

How old was Vera when she died?

Vera Lynn would be 105 years old if she was alive today.

Where was Vera from?

She was born in East Ham, London, England, UK.

Vera Lynn was a famous British singer, who was born on March 20, 1917. As a person born on this date, Vera Lynn is listed in our database as the 36th most popular celebrity for the day (March 20) and the 26th most popular for the year (1917).

People born on March 20 fall under the Zodiac sign of Pisces, the Fish. Vera Lynn is the 1126th most popular Pisces.

Aside from information specific to Vera Lynn's birthday, Vera Lynn is the 219th most famous British.

In general, Vera Lynn ranks as the 15326th most popular famous person, and the 1639th most popular singer of all time. “The Famous Birthdays” catalogs over 40,000 famous people, everyone, from actors to actresses to singers to tiktok stars, from serial killers to chefs to scientists to youtubers and more. If you're curious to see who was born on your birthday, you can use our database to find out who, what, where, when and why. You can search by birthday, birthplace, claim to fame or any other information by typing in the search box, or simply browse our site by selecting the month, the day, the horoscope, or any other clickable option.