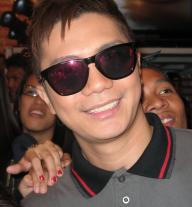 He is an award-winning Filipino dancer, actor and television personality who was born Ferdinand Navarro. He is acknowledged for the role of Reserve Agent King Agila in the 2007 action spy comedy film, "Agent X44".

As a dancer, he has also gained popularity as a prominent member of the Filipino dance group, "Streetboys". He is known to have participated in commercials for brands like Sprite and Blu Tab.

His parents are father, Danilo Navarro and mother, Imelda Hipolito. He was married to Bianca Lapus between 1998 and 2008. He got married to Tanya Bautista in 2019. Fredrick and Isaiah Navarro are his sons.

He won the "Best Reality/Game Show Hosts" at the 2012 PMPC Star Awards; he was named the "Best Male TV Host" at the 2014 Yahoo OMG! Awards Philippines.

He got nominated for the "Best Talent Search Program Hosts" at the 2010 and 2011 PMPC Star Awards.

His nickname is "Mr. Suave".

People born on January 4 fall under the Zodiac sign of Capricorn, the Sea Goat. Vhong Navarro is the 510th most popular Capricorn.

Aside from information specific to Vhong Navarro's birthday, Vhong Navarro is the 11th most famous Philippine.

In general, Vhong Navarro ranks as the 8701st most popular famous person, and the 130th most popular dancer of all time. “The Famous Birthdays” catalogs over 25,000 famous people, everyone, from actors to actresses to singers to tiktok stars, from serial killers to chefs to scientists to youtubers and more. If you're curious to see who was born on your birthday, you can use our database to find out who, what, where, when and why. You can search by birthday, birthplace, claim to fame or any other information by typing in the search box, or simply browse our site by selecting the month, the day, the horoscope, or any other clickable option.