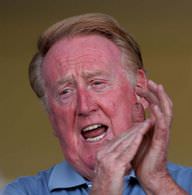 The American sportscaster, Vincent Edward Scully, popularly called Vin Scully, is known for his longevity as a sports anchor with a one team. He had been the announcer for the Los Angeles Dodgers in Major League Baseball for 67 seasons.

He was born in the Bronx, U. S. A. At the age of 8, his interest in baseball grew. He completed his basic education at the Fordham Preparatory School. At a younger age, he worked at the Pennsylvania Hotel; cleaning silver in the underground rooms, pushing garment racks and distributing mails and beers.

He joined the U. S Navy for two years. Later, he enrolled at the Fordham University where he studied journalism and was a student presenter. He helped found the school’s radio station called WFUV. He was also Volume 28’s of The Fordham Ram assistant sports editor.

In 1949, he was employed by the CBS Radio Network as a commentator for its college football which he delivered superbly. This gave him the opportunity to work in the radio and television booths of the Brooklyn Dodgers with Connie Desmond and Barber the following year.

He was born to Vincent Aloysius Scully and Bridget. He married Joan Crawford. After her death, he married Sandra Hunt. He has a son called Michael.

In 1982, he was awarded the “Ford C. Frick Award” by the National Baseball Hall of Fame.

He is a Roman Catholic.

The Dodgers fans voted him as “the most memorable personality” in 1976.

In 1972, his wife died from an accidental medical overdose. 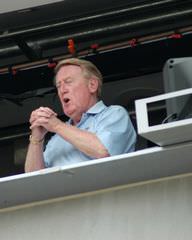 I've told several writers this, and, again, I get back to it, but if you want to make God smile, tell him your plans.Vin Scully

Where is Vin from?

People born on November 29 fall under the Zodiac sign of Sagittarius, the Archer. Vin Scully is the 1269th most popular Sagittarius.

Aside from information specific to Vin Scully's birthday, Vin Scully is the 10583rd most famous American and ranks 25th in famous people born in The Bronx, New York, U.S.

In general, Vin Scully ranks as the 17723rd most popular famous person, and the 11th most popular sportscaster of all time. “The Famous Birthdays” catalogs over 40,000 famous people, everyone, from actors to actresses to singers to tiktok stars, from serial killers to chefs to scientists to youtubers and more. If you're curious to see who was born on your birthday, you can use our database to find out who, what, where, when and why. You can search by birthday, birthplace, claim to fame or any other information by typing in the search box, or simply browse our site by selecting the month, the day, the horoscope, or any other clickable option.