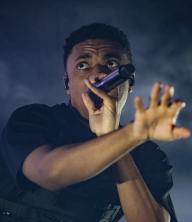 Vince Staples is an award-winning American rapper, actor, and a songwriter who became a global icon for being a member of the hip hop band known as Cutthroat Boyz.

As a solo artiste, he is noted for releasing a series of hit singles including "Norf Norf", “Big Fish”, and "Sheet Music". He kick-started his musical career in 2011 when he released his maiden mixtape dubbed “Shyne Coldchain Vol. 1”. Since then, he has released a number of mixtapes including “Winter In Prague”, “Stolen Youth”, and “Shyne Coldchain II”.

In 2014, Staples dropped his first Extended Play which he named “Hell Can Wait”. He followed it up with his second two years later and titled it “Prima Donna”.

Staples has been associated with some top record labels including Motown Records, Blacksmith Records, and Def Jam. In 2015, he got the contract to appear in a commercial for Sprite.

He was raised alongside five older siblings.

In 2014, he won the “Impact Track” accolade at the BET Hip Hop Awards.

Vince's birthday is in 328 days

Where is Vince from?

He was born in Long Beach, California, U.S..