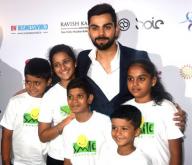 He plays as a batsman for the Royal Challengers Bangalore and he also is the captain of the national team of India. He has been the co-owner of the Indian team FC Goa since 2014.

He is regarded as one of the best batsmen of all time.

He was born in Delhi in 1988. He is in a relationship with Bollywood actress Anushka Sharma.

Virat Kohli's birthday is in 40 days

Where is Virat Kohli from?

He was born in Delhi, India.