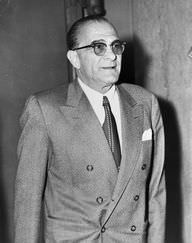 Vito Genovese is credited with helping to make organized crime and the Mafia prominent in the United States. He started heading the infamous Luciano crime family, which later became known as the Genovese crime family, from Lucky Luciano following the latter’s imprisonment in 1936. The two had previously worked together to expand the international trade of heroin. He escaped to Italy in 1937 due to fears of being prosecuted for the 1934 murder of Ferdinand Boccia, a mobster. He made his return to the U.S. in 1945 and by 1957, took over headship of the Luciano crime family once again.

He was the son of Nunziata Aluotto and Frances Felice Genovese. He was raised in Italy until the age of 15 when he immigrated to the U.S. with his family. A year after losing his first wife Donata Ragone to tuberculosis in 1931, he married Anna Petillo who became a prominent businesswoman in the Italian mob.

He died on February 14, 1969 while serving a 15-year prison sentence for narcotics conspiracy.

When is Vito Genovese's birthday?

In how many days is Vito Genovese's birthday?

Vito Genovese's birthday is in 361 days

How old was Vito Genovese when he/she died?

When did Vito Genovese die?

How old would Vito Genovese be today?

Vito Genovese would be 125 years old if he/she was alive today.

Where was Vito Genovese from?