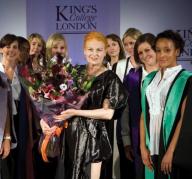 Vivienne Westwood was an iconic British fashion designer and businesswoman who first gained recognition in the 1970s making clothes for the legendary SEX boutique, which she ran along with musician Malcolm McLaren of the Sex Pistols. She was credited for playing a significant role in shaping the look of the punk and new wave fashion movements and making them popular. She was regarded as one of Britain's most influential fashion designers.

From 1962 to 1965, she was married to Derek Westwood. Her second marriage was to Andreas Kronthaler in 1992. She had two children, Ben Westwood and Joseph Corré.

For her services to fashion, she was awarded an OBE by Queen Elizabeth II in 1992. She also won the British Designer of the Year award multiple times.

Title
A pair of Vivienne Westwood designed shoes on display at a Sheffield exhibition in which model Naomi Campbell famously fell over in
Author
Daniel Milner
Source
http://commons.wikimedia.org/wiki/File:Vivienne_Westwood_Naomi_Campbell_shoes.jpg
License
CC BY 2.0

Vivienne's birthday is in 70 days

How old was Vivienne when she died?

Where was Vivienne from?

She was born in Tintwistle, Derbyshire, England, UK.