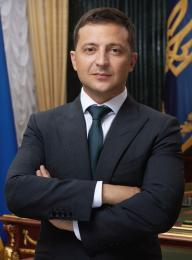 Volodymyr Oleksandrovych Zelensky is the 6th president of Ukraine who was elected into office on April 21, 2019. Before his decision to pursue a political career, Zelensky was a comedian, actor, screenwriter, film producer and writer.

His most famous work in the entertainment industry is the political satire comedy series, Servant of the People, which he not only created but starred in as the main character, Vasyl Petrovych Holoborodko.

Zelensky is also the founder of the Ukrainian production company, Kvartal 95.

He beat the then-incumbent president, Petro Poroshenko by securing almost 73% of the votes, less than four months after declaring his intention to run for the presidency.

He was born to Oleksandr Zelensky, a cybernetics professor, and Rymma Zelenska, a former engineer. He married Olena Kiyashko in September 2003. They welcomed their daughter, Oleksandra, in July 2004. They also had a son, Kyrylo, in January 2013.

In 2006, he participated in the Ukrainian version of Dancing with the Stars as a contestant.

In December 2022 he met with US president Joe Biden and his wife Jill Biden at the White House.

Volodymyr Zelensky's birthday is in 356 days

Where is Volodymyr Zelensky from?

He was born in Ukraine.