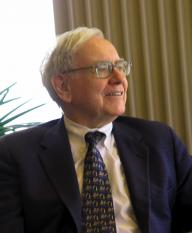 Warren Buffett is an American businessman and philanthropist. He is the chairman, CEO and the largest shareholder of the Berkshire Hathaway holding company.

By July 2022, he had a net worth of $98 billion, making him the eighth richest person in the world.  He is the most successful investor of the 20th century and one of the world's most influential people according to Time magazine.

He has been married twice and he has 3 children. In 2012, he was diagnosed with prostate cancer. Buffett made a full recovery.

In 2008, he was the wealthiest person in the world. In 2009, he donated more than 25 billion dollars to charity, so he was ranked as the second wealthiest man in the United States.

He is an avid reader and spends large chunks of his day reading.

He’s known for being extremely frugal, finally switching from his flip phone to an iPhone in 2020.

He has written two publications and has had several books written about him.

Warren's birthday is in 214 days

Where is Warren from?

He was born in Omaha, Nebraska, U.S..