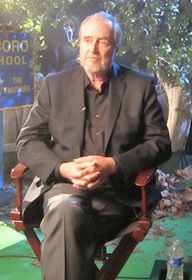 Wes Craven was a celebrated American filmmaker and writer best known for his work in the horror film genre. Some of his most famous horror films include the iconic A Nightmare on Elm Street franchise and the Scream series of films. During his career, he won a number of awards, including a Lifetime Achievement Award from the New York City Horror Film Festival in 2012.

His first marriage was to Bonnie Broecker, with whom he had two children: Jessica and Jonathan Craven. From 1982 to 1987, he was married to actress Mimi Craven. His last marriage was to Iya Labunka. The marriage lasted from 2004 until his death in 2015.

He lost his battle with brain cancer at the age of 76.

The 2011 horror film Scream 4 was the last film he directed before he passed away.

In his leisure time, he loved watching birds.

Wes Craven's birthday is in 359 days

How old was Wes Craven when he died?

Wes Craven would be 83 years old if he was alive today.

Where was Wes Craven from?