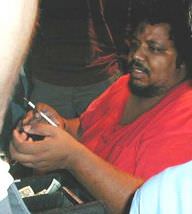 Wesley Willis was a household name during the 1990s. After he was diagnosed with a mental disorder known as schizophrenia, the American singer recorded many hit songs on mental illness. He shot to fame with his album titled “Greatest Hits” which was released in 1995.

A master in the punk rock genre, Willis released a number of hit tunes such as "Rock N Roll McDonalds" and "Chronic Schizophrenia".

In 1991, he formed a musical group known as ‘The Wesley Willis Fiasco’. As the group’s songwriter and singer, he played a key role in the recording of their only studio album which was released in 1996 and titled “Spookydisharmoniousconflicthellride”. As a member of the band, he performed alongside some popular musicians like Henry Rollins, Eddie Vedder, and Jello Biafra.

Aside from his work as a musician, he was also a good artist. He was the subject of the documentary titled “Wesley Willis: Artist of the Streets” which was released by Carl W. Hart in 1998. His works have appeared in Egypt’s Mohamed Khalil Museum.

He was raised by his parents Annie and Walter Willis alongside a brother called Ricky.

Willis was later diagnosed with chronic myelogenous leukemia which played a part in his demise in 2003.

American rock group The Mountain Goats mentioned his name in their song titled "Get Famous".

Wesley's birthday is in 244 days

How old was Wesley when he died?

Wesley Willis would be 59 years old if he was alive today.

Where was Wesley from?