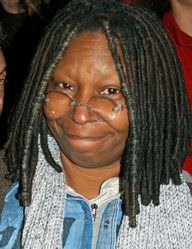 She received a Star on the Hollywood Walk of Fame in 2001.

She is also the writer of the "Sugar Plum Ballerinas" book series.

She is among the 12 people in the world that have won an EGOT (Emmy, Grammy, Oscar and Tony).

She has been married 3 times and she has a daughter.

She supports the LGBT rights and in 2010 she joined Cyndi Lauper in her "Give a Damn" campaign. 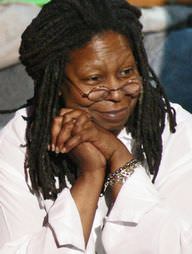 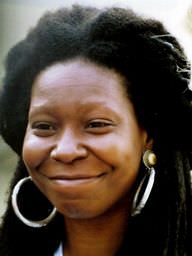 I don't have pet peeves I have whole kennels of irritation.Whoopi Goldberg

I think the idea that you know who your inner self is on a daily basis, because... you know. What's good for you 25 years ago may not be good for you now. So, to keep in touch with that, I think that's the first ingredient for success. Because if you're a successful human being, everything else is gravy, I think.Whoopi Goldberg

I used my imagination to make the grass whatever color I wanted it to be.Whoopi Goldberg

I'm fighting the label of 'Black' actress simply because it's very limiting in people's eyes, especially people who are making movies.Whoopi Goldberg

It's being willing to walk away that gives you strength and power - if you're willing to accept the consequences of doing what you want to do.Whoopi Goldberg

Sitting at the table during Color Purple and looking up and suddenly realizing I was acting in front of Steven Spielberg, was pretty cool. It was pretty good.Whoopi Goldberg

We're born with success. It is only others who point out our failures, and what they attribute to us as failure.Whoopi Goldberg

When I was doing ensemble theater and comedy work, I felt I had some talents. But when I started doing my shows in Berkeley and found that I could be funny on my own, I was shocked.Whoopi Goldberg

Whoopi Goldberg's birthday is in 49 days

Where is Whoopi Goldberg from?

People born on November 13 fall under the Zodiac sign of Scorpio, the Scorpion. Whoopi Goldberg is the 94th most popular Scorpio.

Aside from information specific to Whoopi Goldberg's birthday, Whoopi Goldberg is the 907th most famous American and ranks 33rd in famous people born in New York City, New York, U.S.

In general, Whoopi Goldberg ranks as the 1319th most popular famous person, and the 145th most popular actress of all time. “The Famous Birthdays” catalogs over 40,000 famous people, everyone, from actors to actresses to singers to tiktok stars, from serial killers to chefs to scientists to youtubers and more. If you're curious to see who was born on your birthday, you can use our database to find out who, what, where, when and why. You can search by birthday, birthplace, claim to fame or any other information by typing in the search box, or simply browse our site by selecting the month, the day, the horoscope, or any other clickable option.