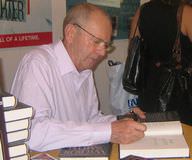 Growing up, Wilbur Smith had the dream of becoming a journalist. However, he studied accounting and worked with companies such as Goodyear Tires and Rubber Co. In 1963, he was hired by the Inland Revenue Service as one of their tax assessors.

It was during his time with the company that the South African began his writing career. His first work "On Flinder’s Face" was bought by Argosy magazine for £70 in 1963. The following year, he published his first novel which was entitled “When the Lion Feeds”.

The Zambian-born writer produced many best-selling books which talked about some historical happenings in the Southern part of Africa. Some of his popular books are “The Sunbird”, “The Eye of the Tiger” and “Hungry as the Sea”.

He was one of the offspring of Herbert James Smith and Elfreda Lawrence, and had a sister called Adrienne. By the age of 25 years, he had ended his first marriage to Anne Rennie. He later married Jewell Slabbart in 1964, but the union ended somewhere along the line.

In 1971, he married Danielle Thomas but the marriage came to an end after the death of Danielle in 1999. He was blessed with three kids named Shaun, Lawrence, and Christian.

He studied at Cordwalles Preparatory School and continued at Michaelhouse. In 1954, he graduated from Rhodes University.

His dad named him after Wilbur Wright, a renowned aviator.

Throughout his career, he published forty-nine books and sold over 140 million of them.

I hate politics. I like to write about it, but to get involved in it, to try and make a lot of ignorant people do what you want them to do, waste of time. Go and write a book. It's more important and it'll last longer.Wilbur Smith

I have been blessed in many ways, and one of those is to have been born in Africa, for me a great treasure house of stories. I have been researching it since my infancy reading about it, talking to men and women who have spent their lives in this land, living it as I have and loving it as I do. I write almost entirely from my own experience.Wilbur Smith

I think money is essential to happiness and right now I wouldn't want to be anyone other than Wilbur Smith - I've had a fantastic life, rewarded far more heavily than I deserve. Maybe I'd like to be J. K. Rowling, but I'll settle for second best.Wilbur Smith

I wanted to be a great white hunter, a prospector for gold, or a slave trader. But then, when I was eight, my parents sent me to a boarding school in South Africa. It was the equivalent of a British public school with cold showers, beatings and rotten food. But what it also had was a library full of books.Wilbur Smith

I'm not a prophet I can only use historical reality to come to a view of the future, and my view is that Africa will return to being African and not European. The advent of colonialism was foreign to the country itself, but it will return to what it was before the Europeans arrived.Wilbur Smith

My mother-in-law speaks not a word of English. I speak not a word of Tajiki. So I smile at her ingratiatingly and she fixes me with a beady eye.Wilbur Smith

The first novel I wrote was a monster - clocking in at 180,000 words - but it died a death, a death it deserved. It was called 'The Gods First Make Mad.' It was a good title, but it was the only good thing about the book. I didn't let that put me off.Wilbur Smith

There's nothing so aphrodisiacal for a woman as money and success.Wilbur Smith

Wilbur Smith's birthday is in 351 days

How old was Wilbur Smith when he died?

Wilbur Smith would be 89 years old if he was alive today.

Where was Wilbur Smith from?

He was born in Broken Hill, Northern Rhodesia1.

Wilbur Smith was a famous Zambian-South African journalist and author, who was born on January 9, 1933. As a person born on this date, Wilbur Smith is listed in our database as the 59th most popular celebrity for the day (January 9) and the 71st most popular for the year (1933).

People born on January 9 fall under the Zodiac sign of Capricorn, the Sea Goat. Wilbur Smith is the 1575th most popular Capricorn.

Aside from information specific to Wilbur Smith's birthday, Wilbur Smith is the 1st most famous Zambian-English.

In general, Wilbur Smith ranks as the 20902nd most popular famous person, and the 118th most popular journalist of all time. “The Famous Birthdays” catalogs over 40,000 famous people, everyone, from actors to actresses to singers to tiktok stars, from serial killers to chefs to scientists to youtubers and more. If you're curious to see who was born on your birthday, you can use our database to find out who, what, where, when and why. You can search by birthday, birthplace, claim to fame or any other information by typing in the search box, or simply browse our site by selecting the month, the day, the horoscope, or any other clickable option.