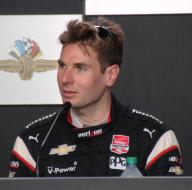 Title
Will Power in a press conference at Carb Day 2015 at the Indianapolis Motor Speedway
Author
Sarah Stierch
Source
https://en.wikipedia.org/wiki/File:Will_Power_at_Carb_Day_2015_-_Stierch.jpg
Credit
Own work
License
CC BY 4.0

William Steven Power, who is professionally called, Will Power, is a successful Australian car race driver who is known for competing in the IndyCar Series. He has featured for several professional car racing teams including Fortec Motorsport, Carlin Motorsport, and Team Penske.

His dad, Bob Power, was an open-wheel racer. His brother, Damien, is a comedian. In 2010, he tied the knot with Elizabeth Cannon. In 2016, the couple had a son named, Beau.

His career has seen him win a number of car racing championships including the Australian Drivers' Championship, which he won in 2002. He also won the IndyCar Series in 2014.

He has a done a bit of voice acting. His voice was used in the 2003 animated American sitcom film, “Turbo”.

Viewers of Will Power, also viewed

F.A.Q. about Will Power

Will's birthday is in 82 days

Where is Will from?

He was born in Toowoomba, Australia.

Will Power is a famous Australian car racer, who was born on March 1, 1981. As a person born on this date, Will Power is listed in our database as the 95th most popular celebrity for the day (March 1) and the 591st most popular for the year (1981).

People born on March 1 fall under the Zodiac sign of Pisces, the Fish. Will Power is the 2850th most popular Pisces.

In general, Will Power ranks as the 35528th most popular famous person, and the 170th most popular race driver of all time. “The Famous Birthdays” catalogs over 40,000 famous people, everyone, from actors to actresses to singers to tiktok stars, from serial killers to chefs to scientists to youtubers and more. If you're curious to see who was born on your birthday, you can use our database to find out who, what, where, when and why. You can search by birthday, birthplace, claim to fame or any other information by typing in the search box, or simply browse our site by selecting the month, the day, the horoscope, or any other clickable option.