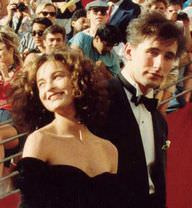 Title
Photo taken at 60th Academy Awards 4/11/88 - Permission granted to copy, publish or post but please credit "photo by Alan Light" if you can
Author
Source
http://commons.wikimedia.org/wiki/File:BaldwinGrey88OscarsByAlanLight.jpg
License
CC BY 2.0

American actor and producer, William Baldwin, is famous as a member of the Baldwin brothers. He has featured in several movies including, “Flatliners” in 1990, “Backdraft” in 1991, “Virus” in 1999, and, “A Christmas Trade” in 2015.

He was born to parents Carol Newcomb and Alexander Rae Baldwin, Jr. He has several siblings including, Alec, Daniel, Stephen, Beth, and Jane Baldwin.

He married singer, Chynna Phillips in 1995 and as at 2019, the couple have been blessed with three children named, Jameson, Brooke, and Vance.

He received a nomination for the “Golden Raspberry Award for Worst Actor” for his role as, Zeke Hawkins in the movie titled, “Silver” in 1993.

He worked as a model in his previous career.

People born on February 21 fall under the Zodiac sign of Pisces, the Fish. William Baldwin is the 460th most popular Pisces.

Aside from information specific to William Baldwin's birthday, William Baldwin is the 3566th most famous American and ranks 3rd in famous people born in Massapequa, New York, U.S.

In general, William Baldwin ranks as the 5535th most popular famous person, and the 790th most popular actor of all time. “The Famous Birthdays” catalogs over 25,000 famous people, everyone, from actors to actresses to singers to tiktok stars, from serial killers to chefs to scientists to youtubers and more. If you're curious to see who was born on your birthday, you can use our database to find out who, what, where, when and why. You can search by birthday, birthplace, claim to fame or any other information by typing in the search box, or simply browse our site by selecting the month, the day, the horoscope, or any other clickable option.