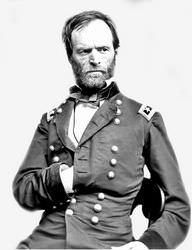 Sherman was a great American soldier, educator, businessman and author who is noted to have also served during the American Civil War as a general in the Union Army. His military command strategy was a very different and radical one, which made him standout of many.

Sherman’s continuous and unforgiving implementation of the "Scorched Eartharth" against the Confederate States was also one to reckon with.

He was born to father, Charles Robert Sherman who was a lawyer. His mother was Mary Hoyt Sherman. However, he was raised by family friend and neighbor, Thomas Ewing Sr., following his dad's death in 1829.

Sherman got married to his foster sister named, Ellen Boyle Ewing in 1850. He had ten siblings including; Taylor and John.

He became a US Second Lieutenant in 1840. The following year, Sherman was appointed as a First Lieutenant of the United States.

Be became a United States General in 1869.

Sherman passed away in New York on February 14, 1891 after an unsuccessful battle with pneumonia. He was 71 years old when he died.

How old was William when he died?

William Tecumseh Sherman would be 203 years old if he was alive today.

Where was William from?

He was born in Lancaster, Ohio, U.S..