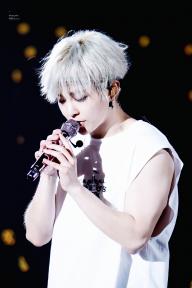 Kim Min-seok, popularly known by the stage name Xiumin, is a South Korean. He is an actor and singer, who is widely recognized for being the lead vocalist and dancer of South-Korean-Chinese boy band, Exo, its sub-unit Exo-CBX and sub-group, Exo-M.

Xiumin placed second in the SM Everysing Contest, leading to a contract with SM Enternainment as a casting trainee for four years.

He is yet to reveal details concerning his family to the public. Although he is known to have a sister, it is rumored that he made a promise to his mother never to reveal their identities.

He won the Award for SNS Web Drama at the 4th APAN Star Awards in 2015.

In 2017, he won the Most Popular Singer award at the Click! StarWars Awards.

He trained in Fencing and Wushu, and has earned a black belt in Taekwondo and Kendo.

He is an avid football fan. As a memeber of Exo, Kim has worked with Suho and Chen.

Xiumin's birthday is in 119 days

Where is Xiumin from?

He was born in Namyangju, South Korea.