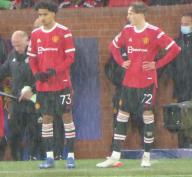 The British-Asian professional footballer is best known as a Manchester United midfielder. In 2022, he was called up to the Iraq national team.

The soccer genius came to the attention of Manchester United while playing for his local club, Sale United. In 2021, at age 19, he signed his first professional deal with the English club. Later that year, he made his pro debut against Young Boys during a Champions League game at Old Trafford.

Zidane joined the 23-man Iraq U23 team for the 2021 WAFF U-23 Championship in Saudi Arabia. The following year, he played for the Iraq senior national team in the World Cup qualifiers against Iran and Lebanon.

In 2021, he participated in an FA content series to promote South Asian Heritage Month.

Zidane Iqbal's birthday is in 82 days

Where is Zidane Iqbal from?

He was born in Manchester, England, UK.