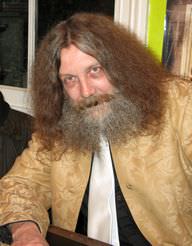 Works: "The League of Extraordinary Gentlemen", "V for Vendetta", "Watchmen", "From Hell".

He is regarded as the greatest graphic novelist of all time. Most of his comic books have been adapted into Hollywood films.

He has been married 2 times and he has 2 daughters from his first marriage. He and his first wife Phyllis had a mutual lover, Deborah. In the 1990's, Phyllis and Deborah left him, taking his 2 daughters with them!

Alan's birthday is in 283 days

Where is Alan from?

He was born in Northampton, England, UK.