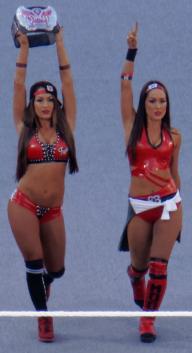 She is an American professional wrestler who was born Brianna Monique. She is the second half of the duo, "The Bella Twins" in which they always appear together.

She is sixteen minutes younger than her sister, Nikki.

Growing up, while in elementary school, she played soccer for the Scottsdale club alongside her twin sister.

While trying to find an agent, she worked at Mondrian Hotel as a waitress. Soon after, she ventured into modeling, acting and running some promotional work.

Bella made her debut appearance on "Meet My Folks", FOX's reality TV show. Soon after this appearance, she and her twin were hired to be the World Cup Twins for Budweiser where they were photographed holding the trophy.

She lived and grew up with her family and was raised on a farm. Her mother is Kathy Colace while her father is Jon Garcia. Her stepfather is former WWE Raw general manager, John Laurinaitis.

She and her sister were named "Choice Female Athlete" at the Teen Choice Awards 2016.

She is a soccer die-hard fan.

Brie Bella's birthday is in 356 days

Where is Brie Bella from?

She was born in San Diego, California, U.S..

What is Brie Bella's height?

People born on November 21 fall under the Zodiac sign of Scorpio, the Scorpion. Brie Bella is the 105th most popular Scorpio.

Aside from information specific to Brie Bella's birthday, Brie Bella is the 968th most famous American and ranks 6th in famous people born in San Diego, California, U.S.

In general, Brie Bella ranks as the 1408th most popular famous person, and the 12th most popular wrestler of all time. “The Famous Birthdays” catalogs over 40,000 famous people, everyone, from actors to actresses to singers to tiktok stars, from serial killers to chefs to scientists to youtubers and more. If you're curious to see who was born on your birthday, you can use our database to find out who, what, where, when and why. You can search by birthday, birthplace, claim to fame or any other information by typing in the search box, or simply browse our site by selecting the month, the day, the horoscope, or any other clickable option.