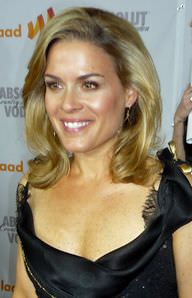 Cat Cora is a renowned American chef, who is known for her incredible cooking skills. Her talent has also earned her several television appearances, as well as other cooking competitions. She has worked alongside some renowned chefs like Bobby Flay, Masaharu Morimoto, and Mario Batali.

Her parents are Spiro and Virginia Cora. Her brother is named Chris Cora. She was married to Jennifer Cora from 2001 till 2013; they remarried in 2013 and parted ways again in 2015. She married American producer, Nicole Ehrlich in 2009. Her children are Zoran, Nash, Caje and Thatcher Cora.

She was the recipient of Bon Appetite Magazine's “Teacher of the Year Award” in 2006.

She is a member of the American Academy of Chefs’ Hall of Fame.

She’s known to be a lesbian.

She had her education at the University of Southern Mississippi and graduated with a bachelor's degree in Exercise Physiology and Biology. She was further trained at the Culinary Institute of America.

A mother's ability to provide for her children is not always tied to income, but rather to education.Cat Cora

Chronic malnutrition, or the lack of proper nutrition over time directly contributes to three times as many child deaths as food scarcity. Yet surprisingly, you don't really hear about this hidden crisis through the morning news, Twitter or headlines of major newspapers.Cat Cora

Even when you have doubts, take that step. Take chances. Mistakes are never a failure - they can be turned into wisdom.Cat Cora

I add a lot of citrus to my food and I think that flavors it. And, to me, that what makes it healthier, lower in fat, lower in calories. It adds lots of flavor. Spices, of course. But citrus is definitely kind of my go-to to season and really to really make those flavors, make that food come alive.Cat Cora

I believe that parents need to make nutrition education a priority in their home environment. It's crucial for good health and longevity to instill in your children sound eating habits from an early age.Cat Cora

I launched Chefs for Humanity, a national nonprofit, with my voice, heart and money from my own pocket. Money gives you the ability to make a difference in the world and, when used in a positive way, is a lot of fun.Cat Cora

I like to abide by the seasons and let the natural flavor in food speak for itself. I use quick cooking techniques of high heat with very little fat, such as quick saute or wok stir-frying.Cat Cora

I think people are more savvy about cooking, food and dining. I notice they are looking for more value for their money - not in larger portions but more in terms of healthier, fresh, farm-to-table dishes with a nice presentation.Cat Cora

I think the biggest thing is clean as you go. Wash all your knives, cutting boards, dishes, when you are done cooking, not look at a sink full of dishes after you are done. Cleaning as you go helps keep away cross contamination and you avoid having food borne bacteria.Cat Cora

I want to talk to the bullied kids of the world. Tell them to hang on, it will get better. Know that an 'Iron Chef,' actors, musicians, artists and all successful people have probably been bullied in their life. And the best part of your life is yet to come. Whatever it takes to live, do it!Cat Cora

I would like a food/lifestyle show. We're not sure what that is yet. I want to be able to share what I do and how I raise my family. I feel like I have a story to tell. I enjoy talking and listening, sharing ideas and sharing advice.Cat Cora

I've been experimenting more and more with LN2, liquid nitrogen. I've used it in battle on 'Iron Chef America,' but have also made some great ice creams at home for my family. Since it freezes basically on contact, you can have ice cream ready in mere minutes.Cat Cora

If eating out, order your meal and ask the server to wrap up half of the portion to take home with your for the next day, keeping your portion size in check, and stretching your dollar into two meals.Cat Cora

In my family, we let our boys have a say in what veggie side they want for dinner that night. We list off a handful of options and get them excited about helping to plan the dinner menu. They're much more inclined to finish their plates when they've helped decide what goes on them.Cat Cora

It's fun to pick a cuisine and say I'm going to research Ethiopian food, and see what it's all about. You find that there are a lot of similarities in cuisines from around the world and a lot of similar flavors.Cat Cora

My humanitarian work evolved from being with my family. My mom, my dad, they really set a great example for giving back. My mom was a nurse, my dad was a school teacher. But my mom did a lot of things for geriatrics and elderly people. She would do home visits for free.Cat Cora

Right now I'd love to be sitting on a Greek island somewhere because of being Greek American, eating great octopus salad and some fantastic lamb. Or sipping a little ouzo. I think the Mediterranean diet is one of the healthiest... Lots of nuts, vegetables, fruits, fresh fish, lean meats, yogurt.Cat Cora

The thing about being at home versus being out in the world working is, it's a whole different vibe. When I'm home with my kids and partner, I will cook - even though she's a very good cook. She's learned over the years. We started with basics, you know, how to saute onions, how to saute mushrooms.Cat Cora

The type of cuisine I do, especially after being on 'Iron Chef' for several years, is a lot of global cuisine. My strength has always been Mediterranean cuisine across the board from Morocco, Spain, Italy, Greece, France, but I think now I'm doing a lot of very different cuisines all the time.Cat Cora

To me, money is the ability to create lifelong experiences for my family and myself, to educate my children and a way to give back to humanity.Cat Cora

We incorporated new tastes and flavors into our kids' diets from a very early age, which helped to develop their palates and prevented them from becoming picky eaters. We don't buy junk food and give them options of fresh fruit, yogurt, raw almonds, or dried whole grain cereals for snack time.Cat Cora

When I was growing up in Mississippi - it was good Southern food... but I also grew up with a Greek family when other kids were eating fried okra, we were eating steamed artichokes. So I think it played a big part in my healthy cooking.Cat Cora

When I'm home, the heart and soul of our family is in the kitchen. Growing up, my parents both worked, so dinnertime was for family - the TV was off. I think it's important to grab that time and really make it special, even after a tough day.Cat Cora

Where is Cat from?

She was born in Jackson, Mississippi, U.S..

Cat Cora is a famous American chef, who was born on April 3, 1967. As a person born on this date, Cat Cora is listed in our database as the 60th most popular celebrity for the day (April 3) and the 171st most popular for the year (1967).

People born on April 3 fall under the Zodiac sign of Aries, the Ram. Cat Cora is the 1490th most popular Aries.

Aside from information specific to Cat Cora's birthday, Cat Cora is the 11184th most famous American and ranks 10th in famous people born in Jackson, Mississippi, U.S.

In general, Cat Cora ranks as the 19067th most popular famous person, and the 35th most popular chef of all time. “The Famous Birthdays” catalogs over 40,000 famous people, everyone, from actors to actresses to singers to tiktok stars, from serial killers to chefs to scientists to youtubers and more. If you're curious to see who was born on your birthday, you can use our database to find out who, what, where, when and why. You can search by birthday, birthplace, claim to fame or any other information by typing in the search box, or simply browse our site by selecting the month, the day, the horoscope, or any other clickable option.