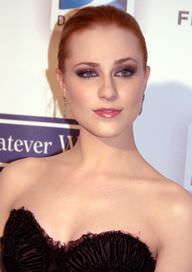 Films: "Thirteen", "The Wrestler", "Running with Scissors", "Across the Universe", "Whatever Works".

She has been nominated for an Emmy Award and 2 Golden Globes.

She was engaged to rock star Marilyn Manson. They split in 2010. She was married to actor Jamie Bell for 19 months and they have a son together. She is openly a bisexual.

She has a black belt in taekwondo!

Where is Evan Rachel Wood from?

She was born in Raleigh, North Carolina, U.S..