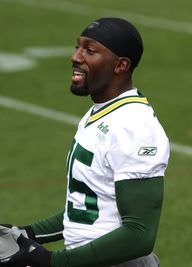 Greg Jennings Jr. is a retired American football player. Before his draft into the NFL, in 2006, he had played football as a member of Western Michigan University’s men’s football team.

From 2006 to 2012, he played in the NFL for the Green Bay Packers, which had selected him in the draft. In 2012, he joined the Minnesota Vikings, for which he played for a year and in 2015, he moved to Miami, where he retired after playing for the Dolphins.

He was raised in Kalamazoo, Michigan. He has been married to Nicole Jennings. They have a son and three daughters together.

As a Green Bay Packers player, he won Super Bowl XLV. He was also featured in the Pro Bowl games of 2010 and 2011.

He established the Greg Jennings Foundation for underprivileged youngsters.

Greg's birthday is in 358 days

Where is Greg from?

He was born in Kalamazoo, Michigan, U.S..