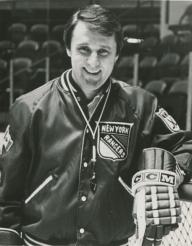 Herb Brooks, born Herbert Paul Brooks Jr., will always be remembered as a legendary ice hockey coach. He began his coaching career in 1970 with the University of Minnesota’s Golden Gophers team, with which he himself played collegiate ice hockey from 1955 to 1959.

Following the team’s success, he was offered the 1980 US Olympic team coaching job. After the team’s victory, he became internationally famous and went on to take charge of the NHL teams New York Rangers, Minnesota North Stars, New Jersey Devils and Pittsburgh Penguins.

He was the son of Herbert Sr. and Pauline Brooks. He had a son and a daughter with his wife, Patti, whom he married in 1965.

In 1974, he was named the Western Collegiate Hockey Association’s “Coach of the Year”.

Title
This is a family photo from my family's archives
Author

Herb's birthday is in 310 days

How old was Herb when he died?

Herb Brooks would be 85 years old if he was alive today.

Where was Herb from?

He was born in Saint Paul, Minnesota, U.S..