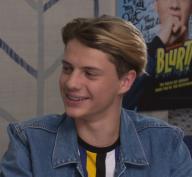 Title
Does Blurt! And Henry Danger star Jace Norman know his Peng Tings from his Worldies? Apparently not, as we find out when we play a game of Slanguage with the Nickelodeon star!
Author
MTV International
Source
https://en.wikipedia.org/wiki/File:Jace_Norman_2018.png
Credit
Jace Norman Plays Slanguage!
License
CC BY 3.0

Norman hails from America – he is a renowned actor who is popularly known for his feature on a Nickelodeon TV series, "Henry Danger", where he played "Henry Hart".

His outstanding performances earned him a slot in the Nickelodeon Original Movie, "Splitting Adam" (2015) and another slot in "Rufus" (2016).

His career kicked off in 2012 when he starred in Disney's comedy TV series, "Jessie".

Norman’s siblings include; Gloria and Xander.

He got nominated for at the 2016 Kid's Choice Awards for the category of "Favorite Male TV Star – Kids' Show" category.

One of his favorite music artists is John Mayer.

He was bullied in middle school for having dyslexia – a reading disorder.

Jace's birthday is in 113 days

Where is Jace from?

He was born in Corrales, New Mexico, U.S..