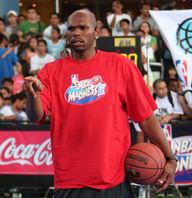 Title
NBA All-star guard Jerry Stackhouse went to the Philippines to host the NBA Madness at the SM Mall of Asia together with the Dallas Mavericks Dancers and the dunking mascot Mavs Man.
Author
Paul Chin from Manila City, Philippines
Source
http://commons.wikimedia.org/wiki/File:JerryStackhouse.jpg
License
CC BY 2.0

After his excellent performance at college, Jerry Stackhouse was drafted into the NBA in 1995 by the Philadelphia 76ers. During his maiden year with the team, he averaged 19.2 PPG, which earned him a place in the league’s All-Rookie team. He also represented his side at the NBA Slam Dunk competition in 1996.

After three years with the team, he was traded to the Detroit Pistons where he recorded an average of 23.6 PPG in his second season. Throughout his 18 years stay in the league, he played for some well-known teams including Dallas Mavericks, Washington Wizards, and Milwaukee Bucks.

Stackhouse is also known for his work as a coach, a profession he pursued after his playing career. He started as a deputy coach at Toronto Raptors in 2015. The following year, he was named as the head coach of Raptors 905. In 2017, he was voted D-league’s “Coach of the Year”.

Two years later, he signed a six years contract with the Vanderbilt Commodores to become their head coach.

His appearance on NBA TV as an analyst has also increased his popularity. He has also worked with other media organizations like Fox Sports Detroit, and ACC Network.

His senior brother is former NBA player Tony Dawson. In 2000, he married a lady called Ramirra Marks. Their children are Jaye, Alexis, and Antonio Stackhouse.

He began playing basketball at Kinston (N.C) High School, before joining Oak Hill Academy. At the college level, he played for the University of North Carolina at Chapel Hill.

In 1995, the Sports Illustrated magazine named him “Player of the Year”.

He played alongside Michael Jordan during his time with the Washington Wizards.

Jerry Stackhouse's birthday is on November 5, 1974.

Jerry's birthday is in 37 days

Where is Jerry from?

He was born in Kinston, North Carolina, U.S..

What is Jerry Stackhouse's height?