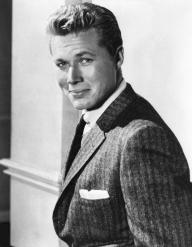 Title
Photo of actor John Smith. The film's original title was Mock Trial. The title was changed to Handle With Care and it was released in 1958.
Author
MGM
Source
https://en.wikipedia.org/wiki/File:John_Smith_1957.jpg
Credit

John was a successful American actor, who gained wide prominence for his appearances in NBC's 1958-1959 Western TV series, "Cimarron City", and "Laramie" which aired between 1959 and 1963.

He featured in the 1952 American drama film, "Carbine Williams" where he acted alongside James Stewart.

He was born to Errol Van Orden and Margaret Van Orden. He was married to American actress, Luana Patten between 1960 and 1964.

He was a graduate of Susan Miller Dorsey High School, and the University of California.

He participated in football, basketball and gymnastics while in school.

He was nicknamed "Smitty".

How old was John Smith (Actor) when he died?

John Smith (Actor) would be 91 years old if he was alive today.

Where was John Smith (Actor) from?