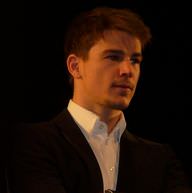 Joshua Daniel Hartnett is a popular American actor and producer, renowned for playing the role of Michael Fitzgerald in the television drama series, Cracker (1997-1998).

He was born to Daniel Thomas Hartnett, a building manager and Wendy Anne, but grew up with his father and stepmother, Molly. His siblings are Joe, Jessica and Jake.

He started dating fellow actress, Tamsin Egerton in 2013 and has had two daughters; Thisbe and Roxanna with her.

Hartnett received the ShoWest Award for Male Star of Tomorrow in 2002.

During the 21st Century Leaders Awards in 2009, he received the Outstanding Environmentalist award.

In 2010, he won the Ischia International Arts Academy Acting Award.

His role as Ethan Chandler in the horror series, Penny Dreadful earned him a nomination for a Fangoria Chainsaw Award.

PETA named him as the Sexiest Vegetarian Alive in 2003.

He supported Barack Obama in his presidential campaign.

At the age of 12, he became a vegetarian. He ate meat, though, during the shooting of "The Black Dahlia" film!

Hope is the most exciting thing in life and if you honestly believe that love is out there, it will come. And even if it doesn't come straight away there is still that chance all through your life that it will.Josh Hartnett

I don't think there's a problem with being a teen idol, if that happens to me, I'll be happy to deal with it.Josh Hartnett

My hat was pulled down and this girl said 'Are you really him?' I whispered 'Yeah, I'm really him.' She screamed, 'Mom! Dad! It's Heath Ledger!Josh Hartnett

People born on July 21 fall under the Zodiac sign of Cancer, the Crab. Josh Hartnett is the 1651st most popular Cancer.

Aside from information specific to Josh Hartnett's birthday, Josh Hartnett is the 9919th most famous American.

In general, Josh Hartnett ranks as the 16707th most popular famous person, and the 2252nd most popular actor of all time. “The Famous Birthdays” catalogs over 25,000 famous people, everyone, from actors to actresses to singers to tiktok stars, from serial killers to chefs to scientists to youtubers and more. If you're curious to see who was born on your birthday, you can use our database to find out who, what, where, when and why. You can search by birthday, birthplace, claim to fame or any other information by typing in the search box, or simply browse our site by selecting the month, the day, the horoscope, or any other clickable option.