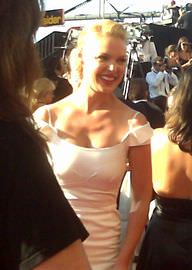 Katherine Heigl is an American actress. She is best known for her role in the TV series "Grey's Anatomy", as well as her roles in popular romantic comedies through the years.

She has worked as a model in the past with Wilhelmina Models and she has been on the covers of Maxim, Vanity Fair and Cosmopolitan, among other magazines.

She is married to actor and singer Josh Kelley. They have 2 daughters together. 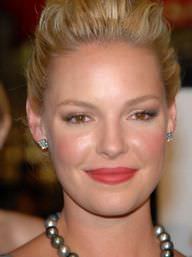 Adoption has been a part of my life and a part of my family, so it was how I wanted to start. It felt natural and right to me.Katherine Heigl

As women, we have more of a tendency to be people-pleasers, and I know a lot of women who are not vocal about what makes them happy.Katherine Heigl

I can't cultivate a relationship with my child if it's between takes. I tried that on a movie and realized, 'This is not going to work.' It will work some of the year, but not 12 months a year.Katherine Heigl

I do like change. That's the one thing exciting about me.Katherine Heigl

I still love the theology of the Mormon religion and think it is a wonderful way to grow up.Katherine Heigl

I think a lot of women innately know how to play their hand. I'm not a big one for the rules.Katherine Heigl

I want my family to resemble the family I came from.Katherine Heigl

I'm a sappy mom now. I didn't think I would be. I thought I'd be a cool mom who keeps everything in perspective.Katherine Heigl

I'm not out burning bras, but I'm very opinionated about women owning their power.Katherine Heigl

I'm really proud of myself because I've pared my beauty regimen down to a cream blush and berry-tinted lip balm, which has saved me so much time.Katherine Heigl

I'm too lazy and I like food and I like my free time too much to spend it working out!Katherine Heigl

Isn't it so weird the day you wake up and you're just going with the flow? And you just suddenly are a mom.Katherine Heigl

Kids are a huge sacrifice they change everything - but I'm ready to work for things of greater importance than going out to meet someone for dinner at 10 o'clock at night.Katherine Heigl

Marriage is actually really terrifying. It doesn't work for many people.Katherine Heigl

My good friends are Mormon, some of the best people I know.Katherine Heigl

My mother is a great source of advice and wisdom and consolation for me.Katherine Heigl

When I do get pregnant, I highly doubt I'll be one of those women who don't look pregnant from behind - I'll be that chick who looks pregnant from her ankles up!Katherine Heigl

Katherine's birthday is in 142 days

Where is Katherine from?