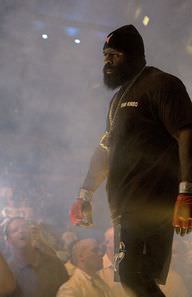 Kimbo Slice began his career with unsanctioned street fights, which were videotaped and shared on websites including YouTube. After gaining attention with these videos, Kimbo Slice started training in MMA. His first MMA match was in 2007 against boxer Ray Mercer, who Slice defeated with a guillotine chokehold. Before his brief time with the Ultimate Fighting Championship, Slice defeated Houston Alexander at The Ultimate Fighter: Heavyweight Finale. He then appeared on UFC in 2010, where he lost to Matt Mitrione. Kimbo slice has since been involved in boxing and professional wrestling.

American businessman and President of the UFC

Kimbo Slice's birthday is in 217 days

How old was Kimbo Slice when he died?

Kimbo Slice would be 48 years old if he was alive today.

Where was Kimbo Slice from?

He was born in Nassau, Bahamas.

What was Kimbo Slice's height?