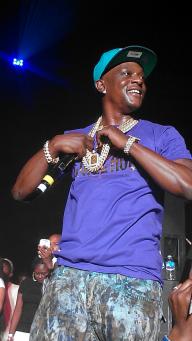 Lil Boosie (Torrence Hatch) or Boosie Badazz is an American rapper. He is also an actor, songwriter, and record producer.

He started his rap career with the hip hop group known as Concentration Camp. He departed the said group in 2000 to pursue a solo musical career. That same year, he came out with his first album, as a solo artist, entitled "Youngest of da Camp".

He has released numerous solo albums and several collaborative albums including his hit 2009 solo album named, "Superbad: The Return of Boosie Bad Azz". His 2015 album, "Touch Down 2 Cause Hell", peaked at No 3 on the Billboard charts.

He was featured alongside Akon on DJ Khaled's 2008 single, "Out Here Grindin".

Boosie has appeared in a few films such as the 2010 crime film titled, "Ghetto Stories: The Movie".

In 2009, he was sentenced to 4 years in prison, after pleading guilty to drug charges. He was also indicted on federal charges for a first-degree murder in 2010, but he was found not guilty. He slapped with a ten-year prison sentence for possession of illegal drugs. The rapper was released in March of 2014, after spending five years behind bars.

He has been in a relationship with Walnita Decuir-Hatch and he has multiple children with different women. He lost his dad, Torrence Hatch, Sr., in 1997. His mom is identified as Connie Hatch - she was a nurse.

Where is Lil Boosie (Boosie Badazz) from?

He was born in Baton Rouge, Louisiana, U.S..

People born on November 14 fall under the Zodiac sign of Scorpio, the Scorpion. Lil Boosie (Boosie Badazz) is the 189th most popular Scorpio.

In general, Lil Boosie (Boosie Badazz) ranks as the 2436th most popular famous person, and the 130th most popular rapper of all time. “The Famous Birthdays” catalogs over 40,000 famous people, everyone, from actors to actresses to singers to tiktok stars, from serial killers to chefs to scientists to youtubers and more. If you're curious to see who was born on your birthday, you can use our database to find out who, what, where, when and why. You can search by birthday, birthplace, claim to fame or any other information by typing in the search box, or simply browse our site by selecting the month, the day, the horoscope, or any other clickable option.