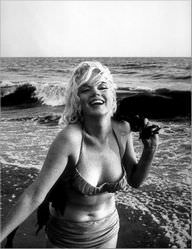 Marilyn Monroe is a world-famous actress in the twentieth century. She began her career as a model and later expanded into other art forms, such as acting and singing. Due to her performances, she became most recognized as a sex symbol and a pop icon.

She was born in Los Angeles, California, to Gladys Baker. Her birth name was Norma Jean Mortenson, and she never knew her father. She spent most of her childhood moving around different orphanages and foster homes. Monroe was sixteen when she first got married. A year later, she started what would be her popularity period in the film industry. She was discovered while working in a factory in Burbank, California. Within two years, Monroe had built a reputable career as a model.

She began her film career in 1946, taking minor roles until 1952, she took the main part in “Don’t Bother to Knock”. After almost seven years in the industry, it was her performance in 1953’s “Niagara” that launched her fame and stardom.

She got married three times, to James Dougherty, Joe DiMaggio and Arthur Miller, and supposedly had a relationship with American President John F. Kennedy and also with his brother, Robert Kennedy. Her final years were troublesome, and in the end she died from an overdose of barbiturates, though this has always been subject to controversy. She was laid to rest at the Westwood Memorial Park in Los Angeles.

In honor of her 96th birthday, a collection of Monroe’s memorabilia was put on auction in 2022, including some iconic pieces she wore throughout her film career.

Monroe won three Golden Globe awards, including one for Best Actress in a Comedy in 1960.

She was an avid reader and built a library of over 400 books in her lifetime.

Monroe recorded more than 20 songs, including “Diamonds are a Girl’s Best Friend” and “One Silver Dollar”. 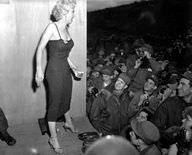 Title
Screenshot of Eileen Heckart, Marilyn Monroe and Don Murray from the trailer for the film Bus Stop
Author
Trailer screenshot Trailer can be viewed here. There are no copyright marks.
Source
http://commons.wikimedia.org/wiki/File:Eileen_Heckart,_Marilyn_Monroe_and_Don_Murray_in_Bus_Stop_trailer_1.jpg
License
Public domain 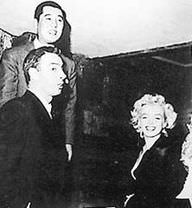 Marilyn's birthday is in 114 days

How old was Marilyn when she died?

Marilyn Monroe would be 96 years old if she was alive today.

Where was Marilyn from?